Public interior, affects you or not?

WOW, I have to share this with you! As you might already know one of my great obsessions is interior design of public buildings and I sometimes tend to be a little defeatist and tough on “them” – cause I rarely see a public building with an expression that shows that the one who has chosen the look actually has thought about the people who’s visiting the office – I often get the impression of everything being picked randomly and I really think thats a shame cause it has such a great impact on the people approaching the place… SO, today I am really excited! The style can be discussed BUT… when I went in to this room for a meeting there was no doubt in my mind that someone has actually cared about this room and neatly picked every single interior accessory! How are your experiences with the interior design of public buildings? 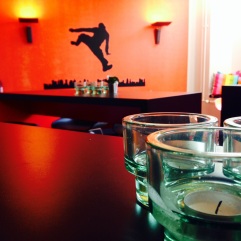 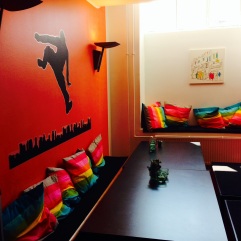 TIME FOR WISE-INTERIOR! The look of todays hospitals…

ITS TIME FOR WISE-INTERIOR! I´ve said it before and I say it again, Ill never get to understand why hospitals have to be SO WHITE, so NOT stimulating and SO boring – if you aren’t sick you might be after looking into a white wall or a white ceiling for just so long… BUT there is still hope 😉

Earlier I´ve showed you how the Danish artist Paul Gernes, back in the 70´s, decorated Herlev Hospital in the most colorful, stimulating and healing wall art – aware of some people found Paul Gernes art a bit over the edge for a hospital! The hospital in Glostrup, Denmark, has also done a great effort to create a warm and nice atmosphere for their patient. How do you find these rooms?

I find the walls very calm, light and warm, but Im afraid there is a BUT cause I still really miss coherence  – it seems like the artist has only concentrated on the walls – what about the floors NOT to mention the ceiling?? I mean the majority of patient in a hospital are lying in a bed with a view to the ceiling! Hmm, and what happened – did they forget all about the bathroom???

SHARE YOUR EXPERIENCES, HOW IS IT DONE AT YOURS????

COLOR MEDICINE!! Cheap and cheerful – why not do it????

“In theory, one could preserve primary colours in a medicine chest, because colours possess both a preventive and a healing effect!!!!”

There is no doubt that Im a huge opponent and fighter against the way our hospitals look – If you have read my previous posts on this topic, you’ll know my arguments! I don’t get it – why do our public buildings look like nobody cares? Somebody must have thought about the interior design, the colors, the furniture, the art – but does it come down to costs, hygiene or what, do they just find random art and white in white as the best solution or what?

It doesn’t seem right that I have to refer back to the 70s, but nevertheless Paul Gernes (1925-1996) in my opinion has done the greatest job Hospital-wise in Denmark. Nobody can possibly doubt that Gernes motive behind his artwork was social – he truly cared  about the people! 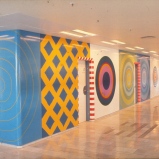 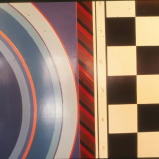 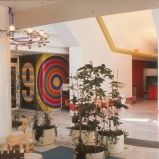 Poul Gernes transformation of Herlev Hospital began in 1968 and contains the most extensive artwork. He thought about every little detail and his color scheme was endless but CLEAR!

At the outset the intention was only to do the foyer – “In other words, the decoration… was basically supposed to be there to delight and divert the building’s guests, the relatives and the people who were visiting those who had been admitted for care. The art here was not aimed so much at those who were sick, who were confined to their beds“.

That being said the rest of the hospital should remain neutral and monochrome, which meant that: “…neither the personnel nor the patients – could be given any reason to react to what they saw around them. The patients should not be given any chance to be distracted from what they were thinking and feeling …, to be distracted from the pain, the suffering and the worrying. A white and completely neutral wall colour would always constitute the best projection screen for whatever notions one might entertain, since the empty wall would not provide any counter-play for anyone – and would certainly not provide any signals that might get a hospital patient to send his or her thoughts into other more stimulating directions“. LIKE IT IS TODAY!!!

Poul Gernes really liked people and disliked white walls ONE of the reasons why I am a huge fan!!

Whats really interesting is how the polychrome environment affected the personal and the patients. A three month long research was carried out and Im not surprised by the result and neither was Gernes!

“… in short order was that the colour scheme, on the whole, had a positive effect on the surroundings: the colour was perceived as a psychosomatic asset, an invigorating remedy, which could be ingested without pills or injections. You just had to use your senses and take a look around… A few negative remarks were also heard… But most of the reactions were positive, and some were even enthusiastic, such as this one: “It’s more wonderful here than at the most expensive luxury hotel. The only thing I actually miss is a bar.” Or “I hope it will take at least a few weeks before I’m well, because I’ve never experienced such lovely surroundings” (Ekstra Bladet; November 18, 1970).

LASTLY and extremely important for the work environment and the level of service delivered, a nurse concluded:
“It takes a while for you to get used to the surroundings, but afterwards, it’s hard to feel comfortable anywhere else” (Ekstra Bladet; November 18, 1970).

I COULD NOT AGREE MORE

– Colours require a period of acclimation then they become addictive

– Colours on the walls could have a stimulating effect on your mind in much the manner of a large bouquet of flowers on a table.

WHAT IS YOUR FIRST IMPRESSION OF GERNES WORK – IMAGINE YOU BEING IN THE HOSPITAL?

Design for all hosts a unique afternoon seminar

One of the greatest challenges that today’s Western societies face is their radical demographic change resulting from the expanding human lifespan. Therefore innovation is required from the professionals, politicians and the older people themselves. Get some inspiration and join the debate with three unique presenters.

Participation fee is 500 DKK (can’t really afford it but it is such an important focus area, that I can’t miss it!)

Photo: Design for All, New angles on senior citizens

Hogewey – a way to live happily ever after???

‘We’ve found that when a resident is placed in the wrong social lifestyle, they quickly become unhappy…’

What is the first thing that runs through your mind when you read a quote like this?

I was attacked by anger, shame and sadness because that is exactly what we are offering our elderly, my grandmother, all the people who doesn’t have the change to spend their last days in a place like the Dutch village Hogewey! There are a lot to say about Hogewey, people has pros and cons but Ill stick to my main interest and focus on the interior design and how it affects people.

Ill shortly introduce you to the Hogewey idea that began 20 years ago. A strong debate about whether or not dementia-people should live without locks, in their own homes and do the same things they did before their illness took hold of them.

One of the founders, Yvonne van Amerongen, was convinced that life in an ordinary care home was not living, but a kind of dying! That wasn’t how she wanted to spend her last days, so she and her co-founders, asked themselves; “How would we want lo live?” The result was Hogewey – a village with several lifestyle options, a place where you are able to identify with your way of living and with the people around you!

Welcome to Hogewey a SPOT ON place, not only to spend, but also to LIVE the last days of your life!

Remember the photos of my grandmothers care setting???? – Do I have to say more!? https://interiorwise.wordpress.com/2014/01/05/wanna-enjoy-your-golden-age-here/

This is exactly what I am trying to address!!!

The importance of creating a feeling of a familiar life to instil calm and peace, reduced stress and increased wellbeing!

We have the knowledge from several numbers of studies, from many different scientific perspectives – all of them result in the same conclusion – the architecture, the interior design, the surroundings affect peoples health and wellbeing! So who has the responsibility to use the knowledge and change the way our elderly live and give them the best for their last days of living!? And what are you – we waiting for?

When I look at the photos, they remind me of my grandmothers real home – when I went to the residential home it reminded me of the canteen at work!  It could be so easy to change the setting; a change that, NO DOUBT, will make such a huge difference!

In Hogewey; …the homes of the Indonesian residents are decorated with flourishes of their indigenous culture: pictures and colours of their other homeland…the garden is set in the Eastern style – suitable for prayer and meditation – right down to a large stone bust of Buddha in the bushes. The ‘city dwellers’ have homes with a typical Dutch urban look: modern, uncluttered, with shelves of books, papers and music”

I know that the answer probably is lack of resources, lack of money! But according to Yvonne they haven’t spend more money on Hogwey than on her former ordinary home!

Why not cooperate with second hand shops and private people who doesn’t have the resources to empty relatives homes when they pass away – they pay people to empty houses like that, don’t you think they would love to donate furnitures to a care home???

Am I the only one who gets really upset and ashamed on behalf of the public-system?